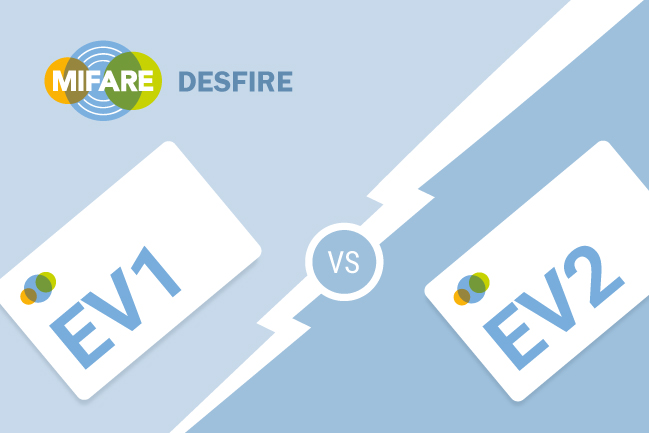 MIFARE DESFire® EV1 vs EV2: it’s a decision many make when deciding on the access control solution that best fits them. In this blog, we’ll examine the differences between the two and hopefully demonstrate why the latter is the better choice for access control in 2020.

What is MIFARE DESFire EV1 and EV2?

The first MIFARE® cards arrived in 1994 as a product of NXP and have since undergone several upgrades to ensure they remain as secure as possible. The DESFire® contactless range was introduced in 2002 to mitigate the risks associated with low-frequency MIFARE® Classic cards (these cards have been vulnerable to hacking since at least 2007).

The range has since spawned multiple generations including the two we are looking at today: EV1 and EV2. Key applications for these products include:

If you’re wondering what DESFire® means, the ‘DES’ is indicative of the high-security level the cards use (3DES and or AES hardware). The ‘Fire’ element represents the cards’ key qualities: fast, innovative, reliable, secure.

Despite there being numerous differences in the overall security and performance of the pair, EV1 and EV2 both operate at a frequency of 13.56MHz and use the same highly secure AES-128 encryption. This means they can both be easily configured to work interchangeably. So, those wishing to upgrade to from EV1 to EV2 can be sure existing card readers will work for the newer technology. 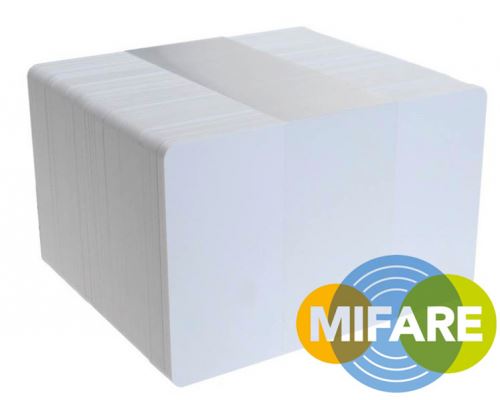 EV1 vs EV2: What’s the difference?

But now what you really want to know: the differences. EV2 introduces many benefits including:

Let’s look at these difference in more detail.

To ensure the most convenient contactless functionality, DESFire EV2 features a significantly improved read range and speed when compared to EV1. The exact speed and performance will vary depending on the card type and the size of the antenna, but the official operating distance is 10cm. However, third parties have shown that the actual operating distance is higher than this.

Speed-wise, DESFire EV2 can transfer data rates of up to 848Kbit/s, making it one of the quickest contactless technologies to date.

Thanks to its DES, 2K3DES, 3K3DES and AES hardware encryption, MIFARE DESFire EV2 benefits from a Common Criteria EAL5+ certification, while EV1 makes to with EAL4+. Other security features unique to EV2 include on-chip backup management and mutual three-pass authentication.

EV2’s Proximity check feature boosts security further, protecting your cards against relay attacks. It does this by assuring the card signal is being read by a reader in close proximity to the reader and not a remote signal from a hacker. Virtual Smart Card architecture also anticipates future needs of privacy protection.

EV1 cards are limited to 28 simultaneous applications. This all changes with the EV2, with virtually no limits on the applications and processes the chip can run.

For those concerned with the compatibility of the EV2 chip, it has been designed to be compatible with previous chips. These not only include DESFire EV1, but older MIFARE technologies too.

Hopefully the above will have given you a little insight into the difference between EV1 and Ev2. To give you a full overview, however, we’ve included a comparison chart below. This goes into more technical detail regarding the differences between the two.

Whether you are considering upgrading to newer technologies or simply need more MIFARE® cards, our experts are always happy to help. Call us on 0800 988 2095 and we will find the products that suit your requirements best.